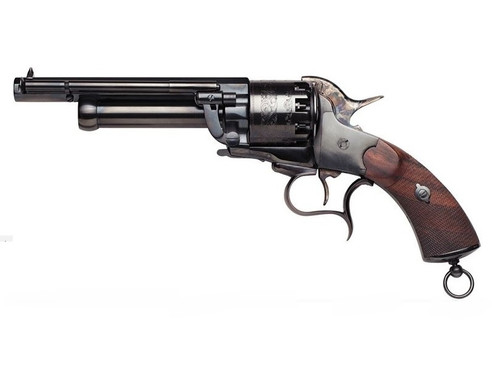 Capacity: 9 Rounds and 1 - 20 Gauge shot out of bottom barrel

The Le Mat revolver is considered the most awesome hand-held firing weapon ever produced. This nine-shot revolver with a 20GA single-shot barrel was a favorite among Confederate cavalry officers. The Le Mat shot barrel is fired by cocking the hammer and flipping down the hammer nose to strike the lower nipple for the barrel. Unlike other wedge retained black powder revolvers, the Le Mat is easily taken apart by using the take down lever and unscrewing the whole barrel assembly. The Cavalry model features include a case hardened hammer and trigger, blued steel parts, checkered walnut two-piece grip, lanyard ring, and spurred triggerguard. This infamous revolver is must-have addition to any black powder collection!